The Last Days of the Dinosaurs 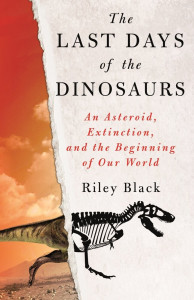 Sixty-six million years ago an asteroid some seven miles across slammed into the Earth, leaving a geologic wound over 50 miles in diameter. More than half of known species, including the dinosaurs, vanished seemingly overnight. In The Last Days of the Dinosaurs, science writer Riley Black takes us through what happened in the days, years, centuries, and million years after the impact, tracking the sweeping disruptions that set the stage for the world as we now know it.

On this episode of Locus Focus we talk with Riley about how this worst single day in the history of life on Earth was as critical for us as it was for the dinosaurs, creating space for mammals to seize the evolutionary opportunities that were closed for the previous 100 million years.

Riley Black has been a fossil fanatic since the time she was knee-high to a Stegosaurus. Based in Salt Lake City, Utah, right in the center of dinosaur country, she chases tales of vanished lives from museum collections to remote badlands. She is the author of numerous articles and books including My Beloved Brontosaurus, When Dinosaurs Ruled, Prehistoric Predators and Skeleton Keys.

Update Required To play the media you will need to either update your browser to a recent version or update your Flash plugin.
Download audio file
Topic tags:
Animals, Environment/Climate, History, Science/Technology