"You Are Doing Nothing" and the Deadly Tragedy of the Politics of Jesus, Guns, and Babies 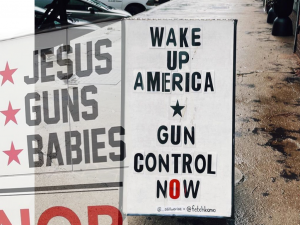 Once again, for the second week in a row, as 19 children and two teachers lost their lives to gun violence in Uvalde, Texas. These mass shootings must be seen as the outcome of the deadly and cynical policies of right-wing Republican politicians. Georgia's Kandiss Taylor lost the GOP primary for governor, but not before she promised to handcuff and even put before a firing squad county sheriffs who were not sufficiently conservative. She made these promises to voters while driving a campaign bus emblazoned with the words, "Jesus, Guns, Babies." Texas Democratic candidate for governor, Beto O'Rourke, confronted Gov. Greg Abbot (R) at a press conference about the mass shooting at the elementary school saying, "You are doing nothing!" He also said, “totally predictable when you choose not to do anything.” He was forcible removed with Republican politicians showering jeers upon him.

In this episode of AMERICAN STANDOFF, host Jacqueline Keeler will look at the Second Amendment and its roots in the United States' horrific history of slavery and genocide. And what we can do if we are serious about stopping this violence.

Update Required To play the media you will need to either update your browser to a recent version or update your Flash plugin.
Download audio file
Topic tags:
Elections, Movement for Racial Justice, Civil Rights/Human Rights, Government/Politics, History, Indigenous

Words and Pictures
Craig Thompson - from the Archive

Radio Ecoshock
Sorry For The Disruption