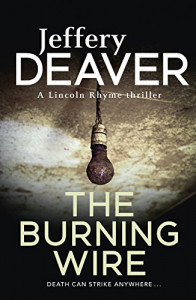 Jeffery Deaver on his book, "The Burning WIre," a thriller featuring the New York power grid

Host Ed Goldberg speaks with mystery writer Jeffery Deaver about his book, The Burning Wire, a thriller about a killer who uses the New York electric grid as a weapon.

A former journalist, folksinger and attorney, Jeffery Deaver is an international number-one bestselling author. His novels have appeared on bestseller lists around the world, including The New York Times, The Times of London, Italy's Corriere della Serra, The Sydney Morning Heraldand The Los Angeles Times. His books are sold in 150 countries and translated into 25 languages. The author of twenty-seven novels, two collections of short stories and a nonfiction law book, he's received or been shortlisted for a number of awards around the world. His The Bodies Left Behind was named Novel of the Year by the International Thriller Writers Association, and his Lincoln Rhyme thriller The Broken Window was also nominated for that prize. He has been awarded the Steel Dagger and Short Story Dagger from the British Crime Writers' Association and the Nero Wolfe Award, and he is a three-time recipient of the Ellery Queen Reader's Award for Best Short Story of the Year and a winner of the British Thumping Good Read Award. The Cold Moonwas recently named the Book of the Year by the Mystery Writers Association of Japan, as well as by Kono Mystery Wa Sugoi magazine. In addition, the Japanese Adventure Fiction Association awarded the book their annual Grand Prix award.
Deaver has been nominated for six Edgar Awards from the Mystery Writers of America, an Anthony Award and a Gumshoe Award. He was recently shortlisted for the ITV3 Crime Thriller Award for Best International Author.
His book A Maiden's Grave was made into an HBO movie starring James Garner and Marlee Matlin. His novel The Bone Collector was a feature release from Universal Pictures, starring Denzel Washington and Angelina Jolie. His thriller,The Devil's Teardrop, was made into a TV movie by the Lifetime network, starring Natasha Henstridge, Tom Everett Scott, and Rena Sofer.
His most recent books are Edge, The Burning Wire, Roadside Crosses, The Bodies Left Behind, The Broken Window,The Sleeping Doll and More Twisted: Collected Stories, Volume II. And, yes, the rumors are true, he did appear as a corrupt reporter on his favorite soap opera, As the World Turns.
Deaver is presently alternating his series featuring Kathryn Dance, who will make her appearances in odd-number years, with that starring Lincoln Rhyme, who will appear in even.
Ian Fleming Publications LTD has chosen Jeff to write a new James Bond book, currently titled Project X, to be released on May 28, 2011, Ian Fleming's birthday.