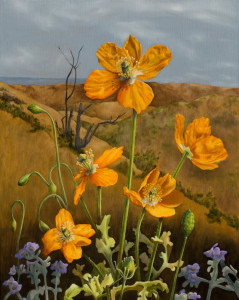 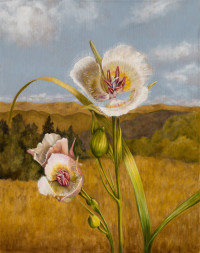 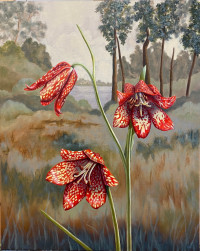 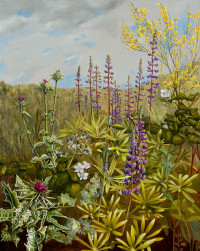 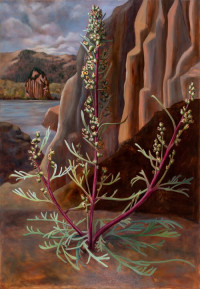 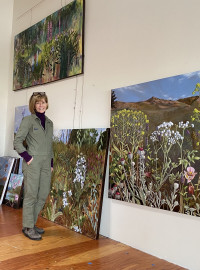 On Tuesday, April 19, 2022, Joseph Gallivan interviews Susan Harrington about her painting show “Our House On Fire” which is on now at Waterstone Gallery in the Pearl District until May 1. Harrington talks about looking for endangered Oregon plants, painting them in observed and imaginary settings, and the huge task of underpainting in oils.

This interview was recorded on a Zoom H2N mobile recorder on April 13, 2022.

A well-known climate activist’s call to action is that we should be acting as if “our house is on fire, because it is.” Waterstone’s April exhibition of oil paintings by Susan Harrington are the artist’s interpretation of Oregon’s own “house on fire”. Harrington makes art about humanity’s relationship with the environment and her current project on this theme is an oil painting series about Oregon’s native and endangered plants.

The deeper meaning of the series lies in the narrative of the subjects who are threatened or nearly extinct due to habitat loss from agricultural and urban development, cattle grazing, wildfire, and climate change. She’s chosen to depict the series in small to large-scale paintings loosely modeled after a late eighteenth century style when artists traveled with scientists and often made paintings “in situ” where the plants were discovered.

Joseph Gallivan has been a reporter since 1990. He has covered music for the London Independent, Technology for the New York Post, and arts and culture for the Portland Tribune, where he is currently a Feature Writer. He is the author of two novels, "Oi, Ref!" and "England All Over" which are available on Amazon.com