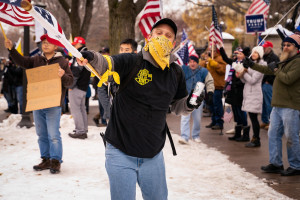 Oregon ranks 27th among states in population but came in sixth among states for violent extremist attacks between 2011 and 2020. State auditors noted this in a recent report released on Wednesday, citing data from the Center for Strategic and International Studies.

In March, the Southern Poverty Law Center said there were ten active hate groups in Oregon, and extremist ideas were moving further into mainstream politics.

The auditor’s report states that the threats have “become increasingly complex and volatile,” with people using social media and websites to propagate “extremist narratives and activity.”

ADVISORY REPORT: Oregon Can Do More to Mitigate the Alarming Risk of Domestic Terrorism and Violent Extremist Attacks - March 2022

Update Required To play the media you will need to either update your browser to a recent version or update your Flash plugin.
Download audio file
Topic tags:
Elections, Government/Politics, Indigenous, Civil Rights/Human Rights