The Left and the Law 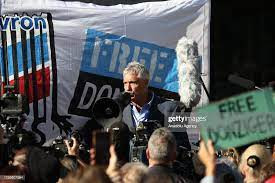 In their Left and the Law segment, Jan Haaken and Mike Snedeker discuss recent judgements in a case brought by Chevron in a NYC Federal court against environmental lawyer Steven Donziger who represented indigenous Ecuadorans in their suit against Chevron for environmental damage from oil drilling in the Amazon. In July of this year, a US District judge found Donziger guilty of contempt of court.  After serving over 800 days under house arrest, he began a six-month prison term in late October. Jan and Mike talk about the significance of this case for Indigenous rights and the international fight against Big Oil.

Steven Donziger speaking at a rally in front of the Manhattan Court House on October 1, 2021. (Photo by Tayfun Coskun / Anadolu Agency via Getty Images)

Update Required To play the media you will need to either update your browser to a recent version or update your Flash plugin.
Download audio file
Topic tags:
Activism, Environment/Climate, Law/Court/Crime