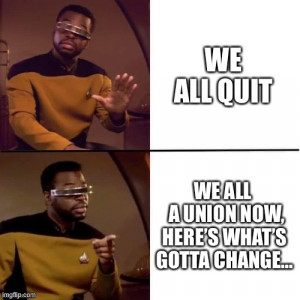 Old Mole Joe Clement talks with labor activist-educator Eric Dirnbach about Strike-tober, the mass quittings and staff shortages affecting the American economy, and whether we're seeing what former Secretary of Labor Robert Reich has called "a disorganized general strike". They consider the social and material conditions underpining labor's leverage in the workplace and economy, and the role of organizing education in building a union culture of problem-solving and agency in the workplace. His writing on some of this recently appeared on Organizing Work.

Click here for the Industrial Workers of the World Organizing Department.

The recording below includes both Part One and Part Two of the interview.

Update Required To play the media you will need to either update your browser to a recent version or update your Flash plugin.
Download audio file
Topic tags:
Activism, Economy, Labor, Civil Rights/Human Rights, Class