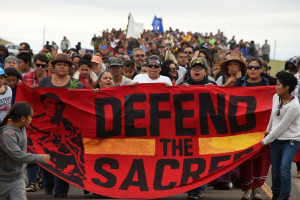 Native Storytelling and the Climate Crisis: Jan Haaken speaks with Don Sampson, Peo-peo-mox-mox Chief of Walla Walla peoples, former chairman and executive director of the Confederated Tribes of the Umatilla Indian Reservation, and current climate change project director for the Affiliated Tribes of Northwest Indians. Sampson reflects on the role of Native storytelling in responding to the climate crisis and in educating on climate issues. The program pays special tribute to beloved departed Umatilla storyteller Esther Motanic with a reading of "The Monster Who Came Up the River" and discussion of her life and work.

Lakota Solar Energy: Bill Resnick interviews Oglala Lakota tribal member Henry Red Cloud, who is enrolled at Pine Ridge, and founded Lakota Solar Enterprise, a small business, and Red Cloud Renewable, an educational non-profit, creating an overall project that has thrived pursuing a mission of preserving and enhancing Lakota traditional culture in a modern world. Henry Red Cloud discusses how respect for nature and cooperative work in which all workers are seen as essential and rewarded as such furnishes the values foundation for the reconstruction necessary to retain a livable planet.

Update Required To play the media you will need to either update your browser to a recent version or update your Flash plugin.
Download audio file
Topic tags:
Activism, Arts/Culture, Indigenous