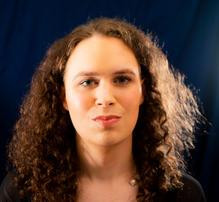 Please join us for Transpositive on Tuesday, September 21 at 6 pm on KBOO as we talk with Anna Freya Lantry about Transgender Vocal Training.

The ability to 'pass' is a real issue for persons who identify as transgender and wish to fit into the binary of masculine and feminine expression as understood by the mainstream, cisnormative culture.  The issue of 'passing' is complex and has a set of assumptions that relate to cis-normativity but on the other side of that conversation is the very authentic desire of transgender people to validate their identity in order to reduce the gender dissonance they experience.  The spoken voice is one of those markers of identity that is read by the dominant culture as a signifier of gender.

While acknowledging that there is a very real movement within trans and non-binary communities to deconstruct these cultural markers, there is also the very real desire of transgender people to utilize those identifiers and master them to fit into their own authentic expression as well as for reasons of safety and desire.  For many transgender people, altering the patterns we have learned from childhood regarding how we use our voice is one of the tasks we undertake to change as part of our transition.

Since 2018, Anna Freya Lantry has provided transgender voice training for those seeking voice feminization, voice masculinization, or an androgynous voice. Transgender vocal training can be used to retrain the way a person both speaks and sings if that is something a transgender person desires as a step in their transition.

Transpositive is a biweekly program in Portland exploring themes important to those who identify as Transgender, Gender Non-Binary, and Gender Non-Conforming. Transpositive tries to connect listeners with the ongoing activist, arts, culture, and dialogue happening in Portland and beyond. Make your voice heard! Transpositive PDX is open to new and experienced programmers, guests, and events you want our community to know about. We are an open collective. Anyone identifying as trans, gender non-binary, gender fluid is welcome to be part of our collective after completing some basic free radio training. For more information contact Emma at transpositivepdx@gmail.com

About Anna Freya: Anna began teaching voice lessons in 2013, while attending college to become a professional opera singer and voice teacher. Her original focuses were transgender vocal training, voice overs, and rock/metal singing, which have persisted to this day. Anna now hold degrees in Voice Performance and Public Health, and has performed in operas, musicals, and choirs as a tenor, baritone, and mezzo soprano. In 2018, she started her business after coming out as transgender herself and retrained both her speaking and singing voice. Anna has since spoken many times for nonprofit organizations, universities, transgender health conferences, and the National Association for the Teachers of Singing (regional and national levels). Anna is currently on the national Diversity and Inclusion board of the National Association for the Teachers of Singing. About half of her employees are transgender themselves, and about 75 percent are LGBTQ+ in some way.

Update Required To play the media you will need to either update your browser to a recent version or update your Flash plugin.
Download audio file
Topic tags:
LGBTQ, Arts/Culture