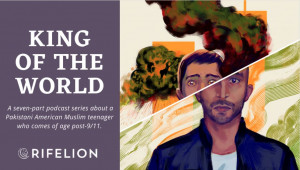 2021 marks two decades since 9/11, and the recent exit by American troops from Afghanistan seem to be the end of an era. But the true impact of 9/11 isn't limited to military intervention and occupation.

Rifelion Media, based in Portland, has produced a seven-part podcast series on the American Muslim experience following 9/11. It's called 'King of the World,' and it traces the events following the tragedy, like the War on Terror and rising Islamophobia, alongside the coming-of-age of Pakistani-American Shahjehan Khan.

Update Required To play the media you will need to either update your browser to a recent version or update your Flash plugin.
Download audio file
Topic tags:
Global Affairs, Faith/Religion/Spirituality