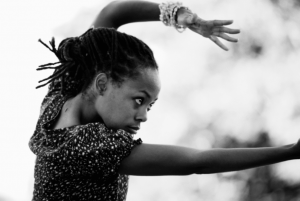 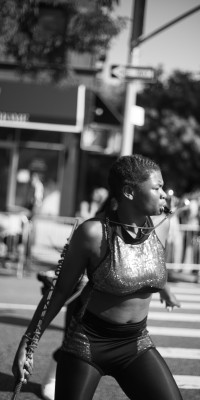 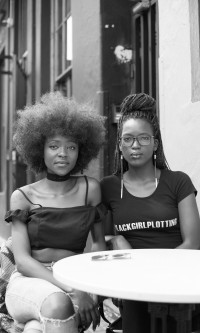 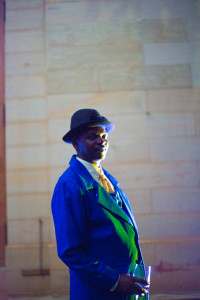 On Tuesday, August 31, 2021, at 11:30 a.m. Joseph Gallivan interviews artist Intisar Abioto about her family’s residency at Building 5 in Northwest Portland. Abioto talks about her photo portraits of Black people which hang in the large warehouse space, printed on translucent vellum. She talks about texture, focus, color, magic, printing her own work and how her portraits are cumulative rather than single works. (This work is not open to the public.)

Storytelling, dreams, history, memory, geography, and choreography are at the root of my practice. My mediums are cross-disciplinary. The tools are what can be found at hand. I was a dancer, first; a writer, second; a photographer, third; and a human body wending her way through space and time always. This sense of the body in space .. both sensing and affecting the landscape is my way. This is choreography. This, too, is the body aware of all her sensors and in every direction. This, too, is precognition ..  to hear the story that could be from all around you..  all that is known and unknown, immediately sensed and not. If a photograph is a stamp, one packet in time's knowledge, then this is a weaving of information across geographic and temporal existence.  I hope the path taken is one of connection, an ever an emboldening of life, care, and love through our image.

Intisar Abioto (b. Memphis, TN. 1986) is an explorer-artist working across photography, dance, and writing. Moving from the visionary and embodied root of Blackgirl Southern cross-temporal cross-modal storytelling ways, her works refer to the living breath/breadth of people of African descent against the expanse of their storied, geographic, and imaginative landscapes. Working in long-form projects that encompass the visual, folkloric, documentary, and performing arts, she has produced The People Could Fly Project, The Black Portlanders, and The Black. Co-created with her four artist sisters, The People Could Fly Project, was a 200,000-mile flying arts expedition exploring realities of flight and freedom within the African diasporic myth of the flying African and Virginia Hamilton’s award-winning book, The People Could Fly.

Abioto is the recipient of a 2018 Oregon Humanities Emerging Journalists, Community Stories Fellowship for which she began a continuing body of research on the history of artists of African descent in Oregon. She has performed and/or exhibited at Ori Gallery, Portland Art Museum, Duplex Gallery, Photographic Center Northwest, African American Museum in Philadelphia, Poetry Press Week, Design Week Portland, Spelman College, Powell’s City of Books, University of Oregon White Box Gallery, Portland State University, Reed College, and Zilkha Gallery among others. Selected for an Art in the Governor’s Office solo exhibition in 2019 she exhibited and performed with nine Oregon-based Black artists against the inner expanse of the Oregon State Capitol building in Salem OR.  Her publication Black Portlands documents interviews with Black Portlanders alongside her photographs. She was a contributing photographer to MFON: Women Photographers of the African Diaspora (2017) and her photographs illustrated the Urban League of Portland’s State of Black Oregon 2015. With the five women artists in her family, she is the co-founder of Studio Abioto, a multivalent creative arts studio. She lives in Portland, Oregon.

This show was recorded using a Zoom HS2 at Building 5 in Portlandon August 26, 2021.