Who Created the Taliban? 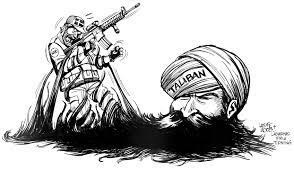 Bill Resnick interviews Stephen Zunes, who teaches, writes, and agitates, specializing in U.S. foreign policy, the Middle East, and the virtues of strategic nonviolent action. They discuss the roots of the Afghanistan debacle, in particular the CIA’s creation of the Taliban in the 1980’s under Reagan to destroy a left government in Afghanistan. The son, the Taliban, then rebelled against the father, the U.S., and after thirty years of a vicious and futile war forced the father to withdraw. Bill and Stephen also discuss what the U.S. owes the Afghan people and whether the Taliban can be moved to moderate their very strict and punitive version of Sharia law. They conclude with a discussion of the U.S. National Security Apparatus and the CIA. Since 9-11 they’ve focused on the Middle East, making it much more violent, poor, and despot-ruled. They now refocus their energies and U.S. military power on Asia, specifically to force China to abandon its imagined plan to dominate the world and outer space. Watch for intensified demonization of China and a space arms race.