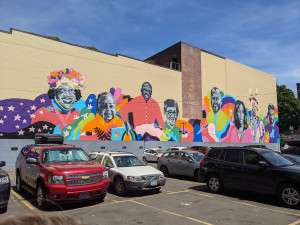 On Tuesday, August 17, 2021, at 11:30 a.m. Joseph Gallivan interviews Cassandra Swan, Ruban Lawrence, Asa Wright and Kyra Watkins about the new Pride NW mural at 8th and Couch in Old Town.  They talk about the eight LGBTQ community members or heroes pictured on the mural, called Never Look Away, and explain the color scheme, symbolism and technique for painting something so large and protecting it.

LGBTQ+ equality in Oregon has come a long way in the last 50 years. Portland, Oregon boasts one of the largest LGBTQ+ populations in the United States. The Portland Pride Waterfront Festival and Parade is one of the largest Pride celebrations on the west coast, and LGBTQ+ Oregonians enjoy some of the strongest protections in the country.

Yet time after time, we are reminded that progress is not guaranteed. As recently as 2019, a lesbian couple in SE Portland was threatened with a pipe bomb. The rise (again!) of the white supremacist/neo-Nazi movement around the country brings with it a rise in violence and bias incidents against LGBTQ+ Oregonians, particularly Black, Indigenous, and people of color. Even now, in 2021, it is still legal in Oregon to claim the “gay panic” defense in a court of law.

Pride Northwest is excited and honored to support and sponsor the Never Look Away mural—a first of its kind in Portland and in Oregon!

From the Mural Production Team:

“Never Look Away celebrates the beauty and struggle of queer people, declaring that queer people are here to stay, because we have always been here. Creation and resistance have been sisters throughout history. We must create what we want in the world alongside resisting that which others people and leaves them vulnerable to anger and violence.”

This show was recorded using a Zoom HS2 at Jailbreak Studios on July 27, 2021.