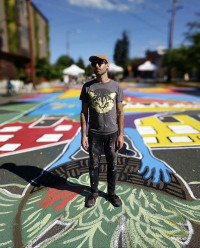 Art Talk Bus Stop is a serial, 30-minute, youth-centered podcast about how artists and creatives do their work and make a living. The podcast is produced by artist and facilitator Erica Thomas and producer Nicole Cabrera. Each month we interview an artist, maker, or creative worker about their career path.

Adam Brock Ciresi is a NY born multidisciplinary artist residing in Portland, OR since 2007. Adam's background is in visual art, painting, and mixed media, holding a BFA in Art Practices from Portland State University, and an MFA from Pacific Northwest College of Art in Visual Studies, where they now teach multiple CE classes. Adam’s mural painting class has painted several recognizable works in the city of Portland, and additionally teaches private classes on large scale and mural painting.

Aside from a formal and variable studio practice, Adam is a street artist with dozens of murals made throughout Portland, OR. Many of the public works are community-based, with socially engaged histories relative to the places there are created in. At the core of Adam’s public practice is collaborative art, where works are made with other artists, people, or communities, including clients for commissions.

Some of Adam’s multimedia work focuses on having a chronic, largely invisible illness called Ulcerative Colitis/Crohn's Disease, and relates it to political and socio-economic systems. Other bodies of art are made in terms of environmental activism and the search for expressing ways of healing. Over the years has shown an art practice that vacillates between concepts that explore hope and buoyancy while others seek to express critical socio-politcal discontent.

As a musician and producer, Adam has released over a dozen records and currently plays in multiple bands, spanning genres such as indie and punk rock.

Update Required To play the media you will need to either update your browser to a recent version or update your Flash plugin.
Download audio file
Topic tags:
Activism, Youth, Labor, Arts/Culture
Genre(s):
Punk, Arts and Culture