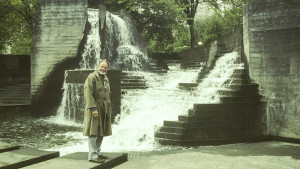 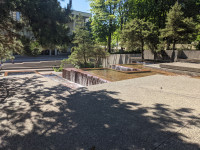 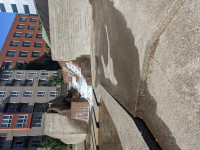 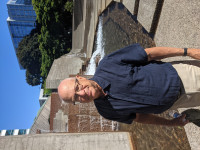 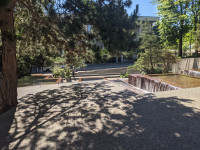 The OJM is organizing walking tours of the fountain sequence from July onwards.

Lawrence Halprin stands as one of the great landscape architects of the twentieth century. In a distinguished career spanning 60 years, he created numerous iconic and trailblazing projects. His signature design methodology and the series of workshops that he developed with his wife, choreographer, and dancer Anna Halprin, grew to be landmarks in creative design practice. Halprin’s work helped to spark a renaissance in landscape architecture in the United States and evolved into a model for creative and innovative work that addresses the urban condition.

In 1963 the Portland Development Commission invited Lawrence Halprin and Associates to design a series of fountains in Portland’s downtown. Lawrence Halprin, Fountains celebrates Portland’s Open Space Sequence, a reinvention of public space in the city’s first urban renewal district, that wiped away a Jewish immigrant community and replaced it with fountain plazas that launched the city’s traditions of world-class public space and urban greenspaces.

In partnership with the Architectural Heritage Center, we will offer weekly walking tours of the South Portland neighborhood that features the fountains and were once the thriving home to the majority of the city’s Jewish community.

The Architectural Heritage Center, AHC, is presenting a companion exhibition, South Portland and the Long Shadow of Urban Renewal, which examines the rise, fall, redevelopment, and future of South Portland. This exhibit looks at the logic and motivations of city leaders, beginning in the 1950s, whose redevelopment efforts focused on the future at the expense of the city’s past and present. These ambitions and impacted residents, businesses, and property owners in one of the city’s most diverse neighborhoods. But it also steered a stagnant, conservative city toward a modernist and meticulously planned aesthetic. OJMCHE and AHC members have reciprocal free admission to these exhibitions.

This show was recorded by on a handheld Zoom HS2 recorder in Portland on June 18, 2021.