Protesters push for eviction ban extension as 90,000 could lose housing due to back rent 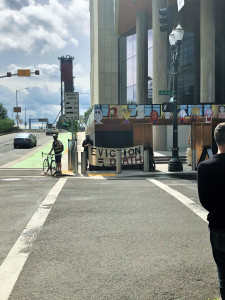 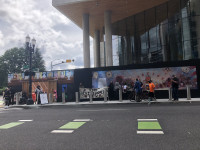 Demonstrators gathered in downtown Portland on the morning of June 15th, to protest the coming end of Oregon’s eviction moratorium. They rallied outside of the Multnomah County Circuit Court, demanding an extension of the moratorium and that tenants have access to legal counsel.

The demonstration was organized by Don’t Evict PDX and Oregon Renters In Action. Oregon’s ban on evictions is set to expire on June 30th. It was started in April 2020 to protect people who lost their jobs during the pandemic from losing their housing.

The number of people that will be impacted and evicted when the ban ends isn’t known exactly. A study from Portland State University estimates that at least 89,000 Oregon households owe back rent.

The group is pushing for the eviction ban to continue, in order to protect tenants who might lose their housing. For some of the demonstrators outside the Multnomah County Circuit Court, the threat of eviction is very real.

Update Required To play the media you will need to either update your browser to a recent version or update your Flash plugin.
Download audio file
Topic tags:
Activism, COVID19, Government/Politics, Housing/Homelessness