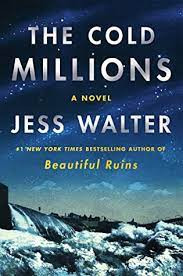 Book Mole Larry Bowlden reviews the novel, The Cold Millions, by Jess Walter, son of a union organizer and meticulous historian of the IWW in the northwest U.S. during the late 1800s and early 1900s. specifically of Spokane, WA, gives us a  glimpse of the terrible campaigns in Spokane, WA, carried  out against the Wobblies in their fight for wages and against the corrupt fees charged by hiring companies. The Cold Millions is a love story between two brothers, weighted with history.

Update Required To play the media you will need to either update your browser to a recent version or update your Flash plugin.
Download audio file
Topic tags:
Class, Fiction, History, Activism