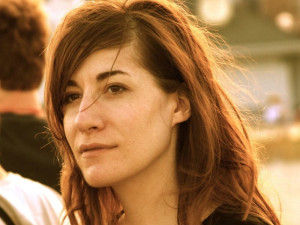 On Tuesday May 4, 2021 at 11:30 a.m. Joseph Gallivan interviews Mollye Asher, producer of the movie Nomadland starring Frances McDormand. Asher talks to Art Focus about the role of a producer in helping a director realize their vision, the character of the light in the Badlands and Nevada. Asher was recently honored in the Cinema Unbound Awards presented by the Northwest Film Center and the Portland Art Museum, which honors boundary-breaking multimedia storytellers working at the intersection of art and cinema.

Thi show first aired on March 16 2021 but is being repeated because of Nomadland's Oscar wins for best picture, director and actress.

FROM THE PRESS RELEASE

Asher recently co-founded the production company The Population with Mynette Louie and Derek Nguyen and is currently in post-production on Josef Kubota Wladyka’s thriller Catch The Fair One. It stars champion boxer Kali Reis and is executive produced by Darren Aronofsky and Protozoa. Asher earned her MFA in Film from NYU and is a member of the Academy of Motion Picture Arts and Sciences.

This show was recorded on Zoom video conferencing software in Portland and New York City on March 10, 2021.