Appalachian Tree-Sit Taken Down by Police After Nearly Three Years 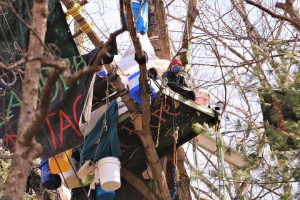 Today we go to the Yellow Finch blockade near Elliston, Virginia, a tree-sit that prevented construction of the embattled Mountain Valley Pipeline for a whopping 932 days until police finally extracted two protesters from the trees. A tree-sit, aka an arial blockade set up in trees, is textbook nonviolent civil disobedience – keep protesters living in trees for as long as possible, and the trees cannot be cut down until the protesters leave or are removed by police. This direct action tactic was developed years ago to oppose logging out West and is now being used to prevent construction crews from cutting down trees in the path of fossil fuel pipelines.

Pipelines endanger ecosystems, but they are also strategic chokepoints in the climate fight. Stop a pipeline, and you can prevent production of fossil fuels for decades to come. According to Appalachians Against Pipelines, the group behind the Yellow Finch Blockade in Virginia, construction of the Mountain Valley pipeline is now three years behind schedule and $2.7 billion dollars over budget. Controversial permits remain in limbo. Is a win for activists on the horizon?