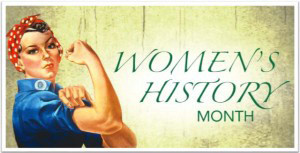 March is Women's History Month, and March 8 is International Women's Day, so today's Pastures of Plenty will celebrate women's voice.

After we hear from the 1960s giants Joan, Joni , and Judy, we'll hear from some great womens voices from ZEngland, Ireland, Scotland, Africa, and return to the U.S. with The Native American Coolidge sistes group Walela.