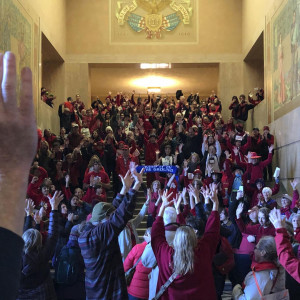 For over sixteen years the threat of a massive LNG export terminal at Coos Bay, fed by a 230 mile 36” wide gas pipeline snaking across five counties, loomed over Southern Oregon. Then on January 19, this project received its quite likely death blow, when the Federal Energy Regulatory Commission upheld Oregon DEQ’s denial of a crucial permit. This is not the first time this project seemed to be defeated, but prospects look bleaker than ever for the Jordan Cove LNG Export Terminal and Pacific Connector Gas Pipeline to ever get built.

On this episode of Locus Focus we talk with three people who have been fighting this pipeline with every fiber of their being. Stacey McLaughlin owns a ranch in Douglas County, that would be on the pipeline route. Ka’ila Farrell Smith is a Klamath-Modoc Indian, whose people have been fighting this pipeline for 16 years and Allie Rosenbluth, Campaigns Director for Rogue Climate in Phoenix, OR, has devoted the last five years of her life to stopping Jordan Cove LNG and the Pacific Connector Gas Pipeline.

Rogue Climate is urging people to send emails to the new Secretary of Commerce urging the Federal government to uphold Oregon’s denial of Jordan Cove LNG.

Update Required To play the media you will need to either update your browser to a recent version or update your Flash plugin.
Download audio file
Topic tags:
Activism, COVID19, Energy/Natural Resources, Environment/Climate, Government/Politics, Indigenous