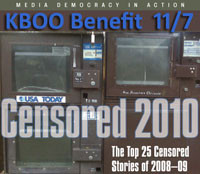 KBOO is excited to announce that the editors of Project Censored 2010 will be hosting a benefit for the station. All proceeds except book sales will go to KBOO.

What: An Evening with Project Censored

Peter Phillips and Mickey Huff will doing a presentation and a Q&A following at the event.

Project Censored was founded by Carl Jensen in 1976, and is a media research program working in cooperation with numerous independent media groups in the US. Project Censored’s principle objective is training of SSU students in media research and First Amendment issues and the advocacy for, and protection of, free press rights in the United States.  Project Censored has trained over 1,500 students in investigative research in the past three decades.
Through a partnership of faculty, students, and the community, Project Censored conducts research on important national news stories that are underreported, ignored, misrepresented, or censored by the US corporate media. Each year, Project Censored publishes a ranking of the top 25 most censored nationally important news stories in the yearbook, Censored: Media Democracy in Action, which is released in September. Recent Censored books have been published in Spanish, Italian and Arabic.

The Project works in cooperation with SSU academic classes Sociology of Media and Sociology of Censorship, where students earn credit for their research and participate in writing the annual yearbook. Additionally, Project Censored sponsors and supervises over 60 student interns a year who do in depth investigative research, sponsor campus events and speakers, and organize a series of Modern Censorship Lectures each fall semester. Students also participate in writing the Project Censored quarterly newsletter (circulation 9,000) and assist with maintaining the Project Censored website www.projectcensored.org, which receives over a million views a month from all over the world.

Between 700 and 1000 stories are submitted to Project Censored each year from journalists, scholars, librarians, and concerned citizens around the world. With the help of more than 200 Sonoma State University faculty, students, and community members, Project Censored reviews the story submissions for coverage, content, reliability of sources and national significance. The university community selects 25 stories to submit to the Project Censored panel of judges who then rank them in order of importance. Current or previous national judges include: Noam Chomsky, Susan Faludi, George Gerbner, Sut Jhally, Frances Moore Lappe, Michael Parenti, Herbert I. Schiller, Barbara Seaman, Erna Smith, Mike Wallace and Howard Zinn. All 25 stories are featured in the yearbook, Censored: The News That Didn’t Make the News.

Project Censored is administered through the SSU Sociology Department with financial support from the SSU Instructionally Related Activity Fund, School of Social Science, Media Freedom Foundation Inc. and donations from thousands of supporters around the country.