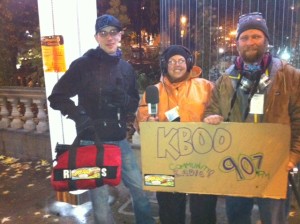 Click here for the Occupy Portland Radio show, airing on 90.7 FM every 3rd and 5th Wednesday of the month from 6 -7 pm

From on-the-scene reporting, in-depth interviews, on-air broadcasts of needs during the encampment, music, and much more...KBOO was there, is there, and will continue to be there. So there!


As the Occupy movement continues calling for the richest one percent to pay their fair share, KBOO News is committed to bringing you full coverage. And be sure to support KBOO to keep this people-powered radio station on the air - donate online by clicking here.

The following is the archive of the real-time updates to the KBOO website as the Portland Occupy movement evolved. Exciting times!

11/23 9 am on KBOO 90.7 FM: Tune in for a special program featuring highlights from our Occupy Portland recordings and interviews.

Video: Police pushing and beating protesters with clubs on Sunday 11/13

Archive from past live webcasts:

Saturday December 3rd 2011 10:00 PM - Around 50 riot cops are stationed in a perimeter around the South Park Blocks, after evicting the attempt by several hundred supporters of Occupy Portland to hold the park.  The Oregon Symphony just let out, and lots of concert goers seem confused by the massive line of riot cops facing them down at the edge of the Park Blocks.

7:30 pm - Occupy Portland is attempting to re-occupy a public place -- the South Park Blocks (SW Park and Salmon) in downtown Portland.  We are re-streaming the LIVE stream from Occupy Portland.

2:40 PM At least ten people have been arrested - probably many more, but no confirmation.  Chapman Square 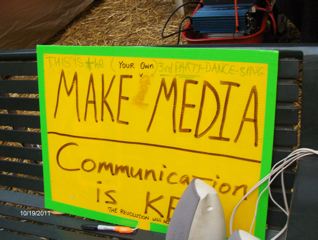 has been fenced in, Terry Schrunk Plaza blocked off by riot police.

12:56 PM Police now moving in on Chapman Square and making arrests, protesters calling out for support.

6:27 am Protesters have re-taken Chapman Square, riot police backed down for a second time this night after a two hour standoff.  KBOO is still there recording, but no longer have the means for a live stream.

3:15 am  Police have retreated, changed shifts, while the crowd remains in the thousands with drum circles, dancing and a hundred bicyclists still going strong. Check the live stream again in ten minutes, we have to switch laptops.

2:15 am Riot police have begun pushing into the crowd on Main St., and announced on loudspeakers that chemical dispersants would be used if people refuse to clear the street.

1:45 am Back online now. Mounted police arrived, but the crowd of over 5,000 people have remained in the street.


12:29 am Stream down, lost laptop power, will try to be up in a few minutes.  Keep checking back.

12:01 UPDATE: We are live again (from a backpack) at the Occupy Portland camp which Mayor Sam Adams said would be evicted at 12:01 Sunday. Tune in to the link below for updates.  A large group of bicyclists recently arrived for support.  Police are milling around, no major mobilization or crackdown at the moment. 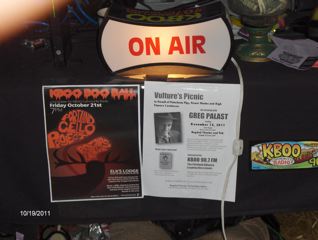 (11/10/11): Mayor Adams announces a plan to evict the Occupy Portland encampment on Saturday night at midnight.  Campers plan a potluck, concert as a welcoming party for the police.

(11/02/11): 5:00 PM - Hundreds of people gathered in solidarity with Occupy Oakland and Scott Olson, Iraq war vet injured by police.  Fire Marshall has shut down the generators on site, so we are working on alternate power possibilities.

(10/20/11): 12:00 PM - Mayor Adams tells press conference he has no immediate plans to evict the encampment, says he agrees that something needs to be done to hold Wall Street accountable.

(10/19/11) : 3:38 PM - KBOO webstream has been live all day - will go until six.  Mayor Sam Adams today told protesters that no marijuana use, medical or otherwise, will be permitted anywhere at the encampment.  Early this morning, protesters confronted the head of JP Morgan Chase at the Governor Hotel downtown.  And at 5, a protest against Condoleezza Rice is planned for outside the Convention Center.

(10/18/11): 12:00 PM - Our webstream is live!  City Commissioner Amanda Fritz will be in Terry Schrunk Plaza at 1 to speak with protesters, followed by a teach-in with former Black Panther Malik Rahim.

(10/17/11): 3:15 PM -Around one hundred people rallied outside the Federal Bankruptcy Court at noon to protest excessive student loan debt and terms.

(10/15/11): 4:30 PM - Around 3,000 people marched to end the ten-year long war in Afghanistan, and bring the money home to support our own economy.  Many of the 'Occupy Portland' campers and supporters were among the crowd, and the messages in the march included 'We are the 99%' and other indications of frustration with the top one percent controlling the economy.

(10/14/11): 5:00 PM - We are now streaming live from Occupy Portland - Listen online or come visit our tent across from the info booth at the encampment!  If you want to give us feedback or request something, just direct a tweet to us @KBOO on Twitter.

(10/12/11): 3:38 PM - Six of eight people arrested this morning when police forced the opening of Main Street have now been released.

(10/09/11): 7:42 PM - Portland Marathon and two Occupy Portland marches went off without a hitch today - Chapman Square is once again fully occupied, and tents are being set up again in Lownsdale Square.  General Assembly meeting currently taking place in the street between the parks, with protesters attempting to hold both parks and the street between. (SW Main between 3rd and 4th).

(10/07/11): 9:55 AM - Portland Police have announced that they will not storm the park at this time.  They are currently negotiating with the Portland Marathon, who have rented the park for the weekend.  Around 250 - 300 people remain in Chapman Park - SW 3rd and Madison.  General Assembly meeting planned for 7:00 pm this evening. 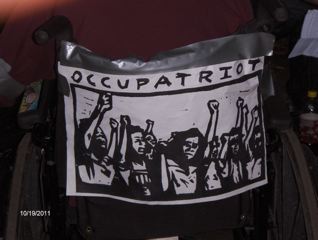 11:55 AM Caller reports seeing a number of large black police vehicles and personnel stationed under the Broadway Bridge.

11:00 AM Picture of crowd at Waterfront

END_OF_DOCUMENT_TOKEN_TO_BE_REPLACED

Words and Pictures
Outdoor Screenings During the Pandemic

Between the Covers
The Fish and the Dove