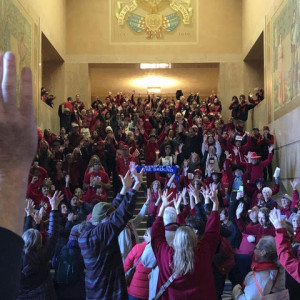 The Salem Progressive Film Series in collaboration with KBOO Community Radio and the Media Project, is presenting The Long and Twisted Tale of Jordan Cove LNG, a slideshow that accompanies Part Two of Barbara Bernstein's "Holding the Thin Green Line” radio documentary series. From July 27 to July 31, you can watch this slideshow video at your own convenience at http://holdingthethingreenline.org/jordan-cove-slide-show/ and then join us on July 31 from 6:30 - 7:30 for a Q&A session with impacted landowners, community organizers and land and water protectors who are featured in the documentary.

This slideshow was conceived originally to show at community gatherings around the Northwest to educate the wider public about what’s at stake for the people of Southern Oregon - as well as our entire region - and the planet - if the Jordan Cove LNG Export Terminal and Pacific Connector Gas Pipeline get built. But until the COVID-19 pandemic is over we are resorting to Zoom and You Tube to create these community gatherings. The Salem Progressive Film Series has moved its operations online and is providing an opportunity for people across the region to watch The Long and Twisted Tale of Jordan Cove LNG at home and then join in an online discussion. This slideshow puts faces to the people whose stories are told in the radio documentary and shows the landscapes that would be destroyed by this fracked gas pipeline and export terminal.

The Long and Twisted Tale of Jordan Cove, chronicles what could be the largest Liquid Natural Gas (LNG) export terminal on the West Coast. This mammoth facility, proposed for Coos Bay, Oregon, would be fed by a 230 mile long, 36″ wide pipeline transporting fracked gas across four counties in Southern Oregon. It would cross much of Southern Oregon, disturbing 480 rivers, streams and wetlands in its wake. For fifteen years community members, landowners and indigenous people have organized and raised their voices to stop this assault on their homes, communities and land. This documentary depicts this struggle and the amazing resistance it has spawned.

Pastures of Plenty
Cinco de Mayo and Birds of Spring

The World of Jazz
The Spirit of Coltrane

END_OF_DOCUMENT_TOKEN_TO_BE_REPLACED

The World of Jazz
The Spirit of Coltrane

Pastures of Plenty
Cinco de Mayo and Birds of Spring