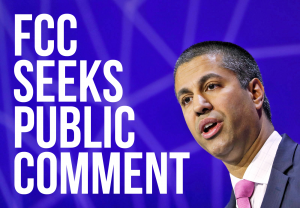 Becky here! I'm the Development Director at KBOO. Communications policy is on my mind these days, and I'm hoping to share a few issues with you.

The FCC is reviewing their rules for broadcasters, and proposes to eliminate the main studio rule (Docket 17-105) among others. Additionally, the FCC is changing the nature of regulation on the internet (Docket 17-108), reversing the decision to regulate the internet as an open utility (aka Net Neutrality,) by allowing ISPs to control bandwidth as they see fit.

I'll explain the implications of both items, and provide a link for public comment. Please give input: the FCC commissioners are not quite sure how these changes will play out, and your input will have an impact on this rulemaking.

Opinions differ on how removing the requirement for broadcasters (both television and radio) to have a physical station in their city of license will impact the industry: Commissioner Clyburn and others believe that abolishing this rule will make it easy for broadcasters to remove themselves from the areas they serve, favoring big business concerns over public interest. Others, such as Chairman Pai, say this rule is archaic and burdensome to broadcasters, and electronic communication/social media remove the need for physical studios.

It is important to take a look at how mass media rulemaking and legislation in the past impacts broadcasting now. In 1996, a similar pro-business environment existed, and an effort to encourage wire-to-wire free market competition was enacted in the Telecommunications Act of 1996. We can't accurately reduce the many changes this law had throughout our communications infrastructure into this blog post; indeed, there is a breadth of research with regards to the policy and public interest impacts of this Act. But one this is certain — there is no way to anticipate what will actually happen when such sweeping changes are made to deregulate an industry to serve corporate interests rather than the public.

The term "Net Neutrality" is one many people have heard, but seldom can explain (myself included.) Here's a clear, simple explanation:

The basic principle of Net Neutrality is that access to all websites and web services should be equal and that anyone can start their own website/service and make it accessible to anyone with internet access, just like any other website/service.

Without Net Neutrality, your Internet Service Provider (e.g. Comcast) could arbitrarily block whatever websites it didn't want you to access (e.g. perhaps blocking you from accessing competitors' websites). It could also mean your service provider purposefully degrades access to certain websites or services and/or forces you to pay extra to access certain websites or services (imagine paying an extra $5 a month to your service provider just because you want to access reddit). (source)

The rules in place now ban your home broadband provider from degrading your Netflix streams to encourage you to buy cable television instead, and prohibit your mobile carrier from blocking Skype. The FCC wants to change that.

There are many entities that are collecting comments against the FCC's push to end Net Neutrality. There is a direct action planned on July 12th as well.

What can I do?

Keep up with the issues

Prometheus Radio Project's Facebook page can provide you with news and updates. REC Networks is an incredible resource for news as well.

Be sure to include the Docket numbers listed above in order to comment on each issue. Tech Crunch has further instructions and sample copy for comment on the rollback of Net Neutrality. Not sure what to write about the Main Studio Rule revision? Commissioner Clyburn's dissent is a great place to start. Keep in mind that the public comment period for this rule change closes on July 5th.

Stations like KBOO are on the front lines of these discussions, and your support is increasibly important as mass communication avenues move even further away from representing your interests.