Treasures From The KBOO Public Affairs Archives are audio gems

Every weeknight from 7 to 8 pm during the Fall membership drive, we are presenting programs from KBOO's Public Affairs Archive. They are examples from an unmatched collection, and we have a plan to make the whole library available to anyone with a computer in the future (with your support!).

Oct. 4th: John Trudell: Descendant Now Ancestor. - Trudell is a Native American author, poet, actor, musician, and former political activist. He was the spokesperson for the United Indians of All Tribes' takeover of Alcatraz beginning in 1969, broadcasting as Radio Free Alcatraz.

Oct. 5th: Margaret Mead (1901 - 1978) One of the world's most famous cultural anthropologists.  Mead believed that anthropology was a way to bring a new understanding of how humans behave, in order to impact the future.

Oct. 8th: A 1978 speech by Ernest Callenbach (1929 - 2012) - author of Ecotopia and Ecotopia Emerging, about how Washington, Oregon, and Northern California seceded from the union in 1979 in the midst of a terrible economic crisis, creating an environmentally sound, stable-state, eco-sustainable country.

Oct. 9th: bell hooks - poet, author, feminist - describes herself as a "Black woman intellectual, revolutionary activist." A prominent thinker about issues of feminism and race (among others), she has published more than twenty books, including Ain't I a Woman: Black Women and Feminism.  The practice of love, says bell hooks, is the most powerful antidote to the politics of domination.

And tune in during the next two weeks to hear: 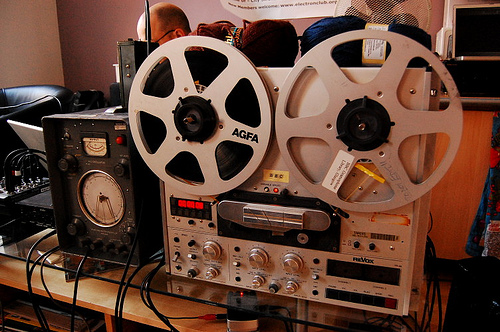 and much much more!

KBOO has an archive of over 7000 recordings of speeches, interviews and documentaries from our 44 years on the air. Unfortunately, we rarely have time to play them on the air, even though many retain their value. Some that are on old-fashioned recording tape are deteriorating. We will soon apply for grants to pay for the digital re-recording of these programs. This will save the sound that otherwise might be lost, and will also enable us to make these unique programs available to you via our website. The foundations that will underwrite this project want to make sure that you, our KBOO audience, care about these recordings. In other words, they want to see us raise some seed money for the project.

If you can help, please donate via our membership form & on the comments form, type ARCHIVE PROJECT.

Stephanie Pierce/24-Hour Church of Elvis - Monday 11:30am-12 noon
In 1991, the proprietor of Portland's 24-Hour Church of Elvis tried to participate in the Rose Festival. Stephanie Pierce was quickly judged to be out of compliance with "family values", and was banned from the festival. She came to the KBOO studios and told her story to Julie Bernard, host of Art Focus.
César Chávez - Wednesday 9am-10am
Encouraged by victories of the black civil rights movement, labor organizer César Chávez began in the early 1960s to protest the unfair treatment of farm workers in California and the Southwest, the majority of whom were Mexican or Mexican American. In 1963 he and Dolores Huerta founded the United Farm Workers of America (UFW), the first effective national organization to represent agricultural workers and press for political reform. The UFW started a boycott of California grapes in 1965 as part of a movement to improve working conditions for field laborers. Four years later, Time magazine published this portrait as its cover image. The effects of the farm workers' strike, known as la causa (the cause), had spread, resulting in a national boycott of grapes by many sympathetic Americans. An Aztec eagle, the symbol of the UFW, is emblazoned on Chávez's shirt.
Chávez spoke at Reed College in 1974.
Sherman Alexie - Wednesday 11:00am - 11:40am
Sherman Alexie is a Spokane Indian, poet, writer of stories and novels. When he does a public reading, it usually turns into some kind of performance art. KBOO went to one such event in Portland in 1994, and though you can't see him on radio, you'll think you are there. Are his stories true? Alexie says that, as a writer, he has the right to make things up.
Tom McCall - Wednesday 11:40am - 12:00am
On Labor Day weekend in 1970, the American Legion was scheduled to have its national convention in Portland, with vice president Spiro Agnew as the keynote speaker. Thousands of anti-Vietnam War protesters were expected, too. Governor Tom McCall feared violent clashes. He threatened to use force to put down any violence, but he also put on a rock concert called Vortex as a diversion for the hippies. A few days ahead, he went on television and radio to tell the citizens that he intended to keep our state safe, both for everyday folks, and for those who hoped to exercise their right of free speech. His 15-minute address is a fascinating example of the times, and of a moderate Republican faced with a no-win situation.
Ramsey Clark - Thursday 9:30am-10:00am
In 1991, President George H. W. Bush sent American troops into Iraq and Kuwait. The war lasted only a few weeks, but the death and devastation to Iraq was widespread. Former U.S. attorney General Ramsey Clark and others believed many of the U.S. actions were war crimes. In this program we hear Clark describing what he saw in Iraq, the legal basis for his claim that international law had been broken, and his plan to establish a commission of inquiry.
Lorenzo Milam - Thursday 11:30am - 12 noon
Lorenzo Milam is a writer, renaissance man, and creator of several community radio stations, including KBOO in 1964. In that same year, he wrote a story called "Sex And The Wrestling Room". He read it on the air in 1970, and here it is again.
Makah Whaling - Friday 11:30-12 noon
In 1999, the Makah tribe on Washington's Olympic Peninsula asked the International Whaling Commission for permission to kill up to five whales. Whaling had been fundamental to the Makah until about a century ago, and they wanted to return to the practice, both for its cultural and nutritional value. Some animal rights advocates and environmentalists were opposed. In March of that year, one such activist, Ben White, and the head of the Makah Whaling Commission, Denise Dailey, participated in a discussion at the Public Interest Environmental Law Conference in Eugene. Must we choose between animal rights and indigenous rights, or can both be protected?