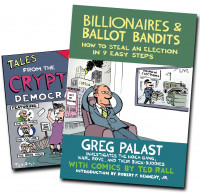 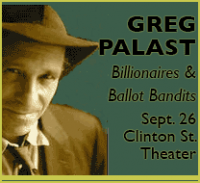 Greg Palast, the insightful, progressive and often controversial journalist is featured in the latest Willamette Week. ‪Read what he has to say to the people of Portland.

Greg will be speaking at a benefit for KBOO Community Radio, Wednesday, September 26th at the Clinton Street Theater. Don’t miss your chance to hear him and get a copy of his just released book, Billionaires and Ballot Bandits.

Tickets are $35 and include a copy of the book. Hurry, seats are limited. Purchase tickets online at Brown Paper Tickets.

Want to meet Greg, up close and personal? Attend a special reception beginning at 5:30 pm, prior to the lecture. Enjoy a glass of wine, savory hor d'oeuvres, meet Greg, and have your book signed. Greg Palast, says Noam Chomsky, "upsets all the right people," and he's coming to town on September 26 as part of the book tour for Billionaires and Ballot Bandits: How to Steal an Election in 9 Easy Steps.

As in the past, Greg has offered this speaking engagement as a benefit for KBOO.

Here's what Greg has to say for himself.

"If you're not sick and outraged and ready to vomit, then don't talk to me.

When I see a cruel bucket of garbage and winky-winky racism and bullshit and venom like Paul Ryan talk to America like he's some kind of Boy Scout, I want a gun, or a TV network where I can tell the truth or a giant washing machine to dunk America and rinse off the crud of lies and pure manipulative evil that they're feeding us.

But I don't like guns, I don't have a TV network, I just have this: A book....It's the most important bullet I've ever fired."

Greg Palast is mad as hell about billionaires buying up our democracy so he's created a new ballot-protection weapon to take back the vote. The award-winning investigative reporter who broke the story of black voters purged from Florida voter rolls in 2000 and exposed Karl Roves voter ID games in 2008 has teamed with cartoonist Ted Rall to produce Billionaires & Ballot Bandits:  How to Steal an Election in 9 Easy Steps.

Join Greg for an evening that delivers the hard evidence on the "full-scale attack on the right to vote" that's unfolding in the 2012 campaign and tools for fighting back in an election that Bobby Kennedy says will see $4 billion spent to derail the voting process.

END_OF_DOCUMENT_TOKEN_TO_BE_REPLACED

Tin Can Phone
Starting Your Own Business and Working For Yourself