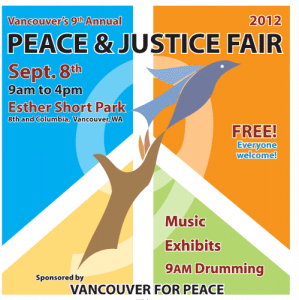 The Annual Vancouver Peace and Justice Fair will be held Saturday, September 8 from 9-4 p.m. in Esther Short Park in downtown Vancouver, WA. This will be the 9th year for this non-political event which seeks to bring together people interested in promoting peace and justice in our community, the nation and the world. At least 60 organizations will be present for networking, education and information. They range from Habitat for Humanity to local faith groups to the Humane Society of SW Washington. There are no political parties or campaigning at this event. A new booth will feature the exchange of "peace items." Bring your buttons, t-shirts and other peace memorabilia and exchange for some other item.

Entry to the fair is free, beginning with a traditional drum circle and ending with a peace and justice songfest led by the David Cooley Band from 3:30 -4 p.m. The Mystic Canyon and Travis Petersen bands are headlining the all day musical entertainment. Children can enjoy face painting, art and creative expression activities and families can purchase a $5 nutritious sack lunch from the fair food booth. Profits are donated to the Beautiful Savior Lutheran Church Sack Dinner Program. Additional information, including a map, is available at www.vancouverpeaceandjusticefair.org.

The time has come for real men and women to stand and be counted for where we stand for American democracy. Our nation was built as a cooperative democratic government of and for the people. We the democrats and the republicans are the people and we must stand as one to protect our democratic way of life, remember that history takes know prisoner and the future will record this, our time as a time when Republicans and Democrats came together holding hands for what is good for American democracy, there is no other option. The tea Party minority interest with in the Republican Party has now taken siege of our Republican Party Representatives, by signing covenant with out side personal  interest, which can only benefit those who seek to dismantle our government. Mitt Romney is the man that can do that and is asking the Republican Party to help him do it.
Ask your self this, “what would this country be with out an American government, I tell you that the only thing that this nation would be is a capitalist monarchy of the few over the many, denying our American people the right to vote, or be represented in government, making our own government one of a government where as taxation with out representation, and then ask your self is this what I want for my nation to stand for? “I say no,” we must work together Democrats and Republicans to restore our two party system and vote the bums out before these mess gets any worst, American history will record this our time as a time of Political unity for the sake of our democratic nation as it stands now any incumbent Republican any where in our nation must commit to the Carol Rovers rules of political order, in order to get elected to the congress or the senate simply because he holds the money. Our country needs the political contras of the two party system and I ask the true republicans to stand with us and help us to make our line in the sands of American history as one people for the good of American democracy our nation and the American people, come with me, and all you all and lets cast our American independent votes for democrats and independents, this action alone will tell our so called Republican leaders in Washington D.C. that they are there to represent the best interest of our nation and the people of our country, and no one else…ArturoCortez…Si se Puede, Tejas