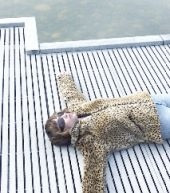 Poetry Editor for the online magazine,  Stirring: A Literary Collection.

Her work has appeared in a variety of journals –

and been nominated twice for Best New Poets. She also

serves as an Administrator of an online poetry workshop, and

as Co-Chair for the Portland Unit of the Oregon Poetry Association.

In addition, she serves on the Board and as Managing Editor for

VoiceCatcher, a non-profit collective that produces an annual

and artwork. She is severely allergic to any activity even remotely

read, and if she has any spare time, to read.

Lucy would say my finger is poking my brain

in the eye and my teeth are chewing

my stomach. But she is eight, and knows nothing

about how sleep stands in a corner

of the bedroom thumbing its nose at me.

Lucy can sleep on a staircase, head on the top step,

hip on the next, feet on the rung below that,

I go to the kitchen, spread pages of yesterday’s

newspaper in a crossword puzzle on the table,

and make Easter eggs for her from balloons

I hear my mother saying

All your lopsided creations are minchiata,

And who am I to argue?

The string is Phileas Fogg on a journey

around the balloon, but with fewer obstacles

to steal its fortune. Only the cat worries it,

depends on the things that go wrong.

I woke that morning in bed with him

dead, his shoulder pressing my arm,

deflated on a fistful of needles and pins.

Diabetes is a real trip not a destination,

he’d quip. What would he say about traveling

around a balloon at night

without some sort of stopping point?

Lucy materializes from her room to break the china plate

of darkness, the bounce-back ability

of rubber balls riding on a yellow blanket

She climbs her usual chair

Her blood glucose is low, so we drink

orange juice together. The everyday accompaniment

of scrambled eggs and milk,

bacon and toast are too far away at two

in the morning. What would she have done

if she’d known the consequence

of following too closely in a father’s footprints?

Perhaps fetuses who run away

from the womb too soon

are only saying no. Her lazy eye

wanders left as if half of her believes her right

to choose rolled under the refrigerator.

She brings air to a shrunken balloon

with the smallest puffs of life.

There is starch in her hair and an impulse

to fix it. Where does Phileas go next,

Balloons burst inside a dozen eggs

until all that remains is string.

Featured in the Spring 2009 edition of Salt River Review

It would be obvious to a guy with one eye
that I don’t belong here. I lose Nick to the couple
watching a made-for-TV movie and arguing the tenor
of Charlie Manson’s insanity (he says simple schizophrenia,
she says schizophrenia with paranoid tendencies)
while they turn powder to liquid
in a silver spoon. Talk to Alan, they tell Nick.

Alan deals because he has kids
to send to college like everybody else who lives
in this cardboard complex of stacked boxes.
In the kitchen I find the only guy with a straw
in his Coca Cola. He stares at me long enough
to burn his retinas and says Did anybody ever say
you look like a china doll? Sit down. You play cards?
Not well enough to bet my 401K. He flips cards
like flapjacks and pushes a pile of pretzel sticks
to my side of the table. I throw back two, he throws in four.
New Jersey Bill has eyes that have seen men bounce
like pinballs in the alley behind the R & R bar,
and hands that held his wife’s head out of the gutter water
the only night he wore his seatbelt on Auburn Road.
The night it rained too much Jack Daniel’s down his throat;
the wife who took him two bad marriages to find. He asks
What are you supposed to do about that, doll?
and points to the space in his chest where his life
used to be. He smiles like a congressman who spends

to Washington. He’s not talking about the eight years
vehicular manslaughter gave him to find his conscience
in a living room with a toilet and he doesn’t try

I told Nick no twenty years ago. I predicted everything

we owned would go straight up his pug nose.

and diabetes stole it all instead.
You’re asking the wrong doll, New Jersey.

Remember when smoke was smoke?

When weed was art, not medicine.

And pretzels had the decency not stare

back at you from the bottom of a porcelain bowl.

This is when that one-eyed jack

who rarely hangs out with the perfect ten

show up together on my side of the table.

Bill is shifting like a small inside an extra large T-shirt,

his head bobbing in rhythm to the dog he had

on the back dash of the car.

Shit, New Jersey, tell me –
what are you going to do about that?

Two Women in the Garden of the Ward

In the day-time, you felt that you had got high up, near to the sun, but the early

mornings and evenings were limpid and restful, and the nights were cold.”

On restful mornings, Emma and I tie crimson bandannas around our heads. We are told the florid color will make our movements through the garden easier to track. For security we must share a single pair of pruning shears. Only the red-headed woodpeckers who nest in dead trees accept us as their own. Old growth branches of the butterfly bushes need heavy pruning, but Emma’s hands are clumsy and her clippings modest. The tranquilizer has left her tentative. Each cut, the nurses assure, will move her nearer to the sun.

She does not speak ill of anyone but herself. I read to her of Blixen’s farm, slightly bitter scents of coffee-blossoms. She asks if she might smell the pages as though perfumes could linger there. Emma is loved by someone poor and must leave this place when the money runs out.

One limpid evening, I knot the end of my bandanna on the branch of a sawtooth oak; I imagine the fabric hangs like the newspapers say Emma did in the cold of the night. I hack so far into the heartwood, I know the butterfly bushes will not live. A legion of woodpeckers ascends, bow their red heads in deference to me on their passage to more hospitable climes. I have cut with so much passion the pruning shears are split in two, yet I find myself no nearer to the sun.