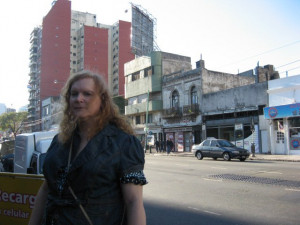 I'm not broadcasting until mid-August, because I have traveled to Argentina, where I can find experienced surgeons and a working-class surgery price ($6200+hotel+air fare).  Although I have a union civil service job, transgender medical care is specifically prohibited, in writing, in the policies set by my employer ("Tri-Met"). So whereas I have had two expensive non-transgender surgeries in my dozen years there, I cannot address my current medical needs, except on my own time and on my own dime, so to speak.  When queried about this situation, Trimet responded that trans care was like breast enhancement--an option, or a whim. So it goes. And so I have crossed the Equator.

I will send updates and commentary to KBOO members in this way, until I return. My surgery--facial feminization--is scheduled for Monday.

I arrived on the 21st with Ani, my partner, who you all know as the Volunteer Coordinator at KBOO. To enter Argentina, Americans must pay $140 each, which is direct retaliation for a fine imposed on Argentinians by the US government. We had no problems entering. We've been ripped off by a charming old taxi driver who got away with several times the normal fare, but we've figured that out now.

The doctor is very focused and matter-of-fact; I have to remove my nail polish and eat nothing the day of surgery (Monday).  If all goes well I'll return August 7th with somewhat reduced and feminized face, with glaring stitches a la Bride Of Frankenstein.  Maybe I can find a black beehive wig with a white stripe in it....

We went out into trash-laden streets at 2AM last night. It seems like a pretty clean culture here overall, but the streets, well--who knows what's up with that?  No matter--we found a dank greasy bar (The "Moby Dick") and had empanadas and Guinness, or rather that is what I had, and Ani had agua con Gas (mineral sparkly water). If you can tell the difference between this bar's empanada and a cheese sandwich you win the prize--it was in white bread. (Ani points out I only thought I had ordered an empanada.) I was hungry though--it got eaten. A pendulum lamp, kept in motion by unseen forces, swung over a pair of young women. Rock and roll played at the bar.

Right now I'm in a charming tiled courtyard with lime green walls, opposite the double oak-and-glass doors of our room ("the Rojo Room").  The temperature is perfect (15C), no bugs, sounds of sparrow-like birds, traffic distantly, faint odors (same as the whole town) of soap, coffee, cardboard, and flowers and kerosene, and of course Ani's cigarette.

Ani and I were so snoozy this morning, we couldn't figure out if it was Saturday or Sunday.  After much discussion and half-rememberings, we checked with the beautiful clerk girl, who confirmed that it is Saturday.  Thank gods.
Breakfast is just a matter of going through the room door, three steps through the tiled and fragrant atrium patio,through the brass-latched doors to the lobby, where the usual fare is laid out: pastries, cheese, ham, orange juice, and blessed coffee.

The subways are heavily used, guarded by policia, and cleaner than the streets.  There is no "sit-lie" ordinance here--I saw a young man lay down on a subway bench right next to a cop.  Above ground, the cops drive about in their economy sedans, always with the blue lights flashing; no one takes notice.  A loud mooing sound warns that the subway doors are closing; I began to think of it as "the subway cow."  People want to stare at Ani and I but are too polite, at least at close range.  The subways are the shit for getting about; the streets are chaotic and slow, and the taxi drivers miss no chance to rip you off.

I have met wonderful, kind people, however.  Ani and I went into a bookstore ('libreria') and bought a book on local birds.  Ani was twitterpated with one of the clerks, understandably so, and indeed all the clerks were cute as bugs, and joked with us and offered advice and directions.

Last night, wandering into a shiny-looking restaurant ("Velvet") at around 10PM, we dropped 300 pesos on our more-or-less anniversary meal: giant slab-o-beef with local mushrooms, fresh onions, and little potatoes, with salad. "Velvet" is cheerily decorated with primary colored sculptures, reliefs, and several televisions. The waiter made a big deal of cutting the steak (it was two inches thick) with a spoon.  I had Johnny Walker Black on the rocks (the waiter replied "Johnny Negro?" and I nodded, hoping I wasn't going to get something local and rum-based).  Waiters and clerks prefer to talk to Ani; I seem to disturb them; Bearded Ani does not. Go figure.

Ten at night was just when the place started to fill up, we discovered. Across from us a cherubic boy with a thick mop of soft caramel ringlets crawled into his daddy's lap, and dropped off to sleep, face up; the conversation at his table was uninterrupted by this non-event.  The television showed the shocking attacks in Norway, and we wondered if it was a false-flag attack--a Gladio type event?

Sitting at the restaurant came as quite a reprieve, after a nocturnal hike through the broken and trash-strewed calles.  (We have learned dog-poop vigilance.) I thought we were going to encounter the Chilean border, or penguins by the sea, after a long while, because all the streets began to look the same, I had no idea which direction we were going, and I was getting sore of foot and back.  I still can't fully comprehend what it is to be in a city of ten million, although after last night I begin to understand that one does not merely stroll across town!  After we left the restaurant, it became clear that the late night belongs to the youth, young men and women, redolent of cheap fragrance and cigarettes, standing in groups of two to five; though we saw children too, using the basilica courtyard for bicycle hijinks.

The stars cannot be seen for the lights and haze.

There seem to be endless pizzarias open late, for delivery only.  We passed a late-night "florist" brothel, guarded by a stale odor and a puckered pugilist.  Ani took photos of the extensive pro-worker and anarchist graffiti.  The people here are not afraid to embrace anarchism and socialism--it's a breath of fresh air for me!

<p>a possible explanation as to why folks might generally address me and not Theresa:</p>
<p>Bearded or no--- my pronunciation is clearer.&nbsp; As listeners may know, Theresa speaks with a fair dose of Texan... and being tired (or enjoying the Johnny Negro whiskey, for example), only makes it a bit more noticeable.&nbsp; While Theresa's vocabulary is better than my own, folks do seem to understand me better, and I&nbsp;end up repeating what she's said.&nbsp;</p>
<p>By and large, it seems we (bearded girl and trans woman)&nbsp;are getting about as much attention here as we do anytime we leave the confines of inner city Portland.&nbsp; Actually, far less attention here than if we were, say, most of Portland's suburbs.</p>
<p>And the graffiti!&nbsp;&nbsp;Portenos could teach Portlanders a thing or two...... <img alt="" src="http://a2.sphotos.ak.fbcdn.net/hphotos-ak-snc6/284549_10150264331949496_... align="bottom" border="05" width="200" height="150"></p>
<p>&nbsp;</p>