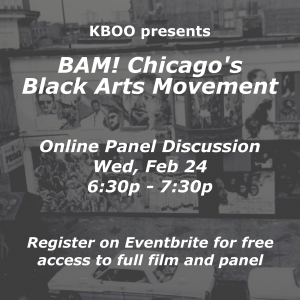 Register on Eventbrite for panel and link to watch film

“BAM! Chicago’s Black Arts Movement” features interviews with Adams, Haki Madhubuti, Safisha Madhubuti, Eugene Redmond, Mwata Bowden, Angela Jackson and many other artists and scholars. The film introduces viewers to the history of Chicago’s Black Arts Movement (BAM) and reflects on the extensive national and international impact of Chicago's Black writers, musicians and community organizers and the organizations and institutions that they supported and founded including the Association for the Advancement of Creative Musicians (AACM), the Organization of Black American Culture (OBAC), Negro Digest/Black World, Ebony Talent Agency (ETA), the DuSable Museum, Third World Press, Johnson Publishing, Kuumba Theatre, and the South Side Community Arts Center.

Thabiti Lewis is the author of Ballers of the New School: Race and Sports in America (2010) and "Black People Are My Business": Toni Cade Bambara’s Practices of Liberation (2020)

Pavithra Narayanan is the author of What are You Reading? The World Market and Indian Literary Production (2012) and the documentary film, India and Free Trade: A Closer Look at Bhopal (2000)

Angela Jackson is the Illinois Poet Laureate and, among many accolades, recipient of an Academy of American Poets Award and two American Book Awards