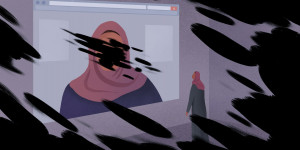 Zoom, the web-based videoconferencing platform, recently prohibited San Francisco State University from using its software to host a planned webinar on Palestine. The panel discussion featuring Leila Khaled, the Palestinian resistance icon who is now in her seventies and lives in Jordan.

A member of the left-wing political group the Popular Front for the Liberation of Palestine (PFLP), Khaled is best known for her role in a series of plane hijackings in 1969 and 1970. She has not been involved in any armed resistance activities in decades.

On this morning's program, we feature interviews with Professor Rabab Abdulhadi, the director of the Arab and Muslim Ethnicities and Diaspora program at San Francisco State University, Gender Studies Professor Tomomi Kinukawa, Dima Khalidi of Palestine Legal, and Murtaza Hussain of The Intercept, who wrote the recent article The Real Cancel Culture: Pro-Israel Blacklists.

Update Required To play the media you will need to either update your browser to a recent version or update your Flash plugin.
Download audio file
Topic tags:
Activism, Indigenous, Government/Politics