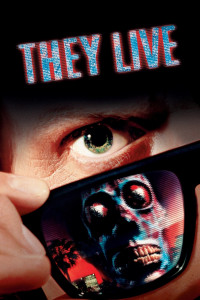 Joe Clement and Frann Michel review John Carpenter’s cult-classic sci-fi social commentary film, "They Live." Joe and Frann turn to this film because of its obviously critical message about late capitalism and the way some of its complaints, seemingly new and unprecedented at the time, resonate with the struggle against global capitalism today. But they have mixed feelings about how far John Carpenter's portrayal of society hijacked by otherwise unseen aliens through psychological manipulation can go as a social analysis of the real actors and sources of inequality, injustice, and social and environmental destruction.

The film will be showing at the Portland Art Museum's Whitsell Auditorium October 13th at 2pm . You can check it out for free at the Multnomah County library, too. Johnathan Lethem’s monograph on "They Live" which Frann Michel refers to can also be borrowed from the library.

Update Required To play the media you will need to either update your browser to a recent version or update your Flash plugin.
Download audio file
Topic tags:
Arts/Culture, Film