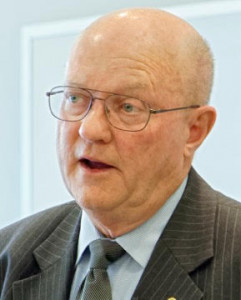 The list of U.S. invasions, occupations, coups and sanctions in Latin America is a mile long. It is after all, “our little region over here,” and our “backyard” according to policymakers in Washington. Starting with the Monroe Doctrine in 1823 the continent and its people have been a laboratory for U.S. intervention, a kind of piñata, a punching bag. As the U.S. became a world power techniques perfected in Latin America were then globalized. Today, once again Washington turns its hegemonic gaze south. The National Security Advisor John Bolton denounces the “troika of tyranny”— Cuba, Venezuela and Nicaragua and the leaders of those countries as “the three stooges of socialism.” Apparently with no sense of shame or of history Bolton declared, “We’re not afraid to use the phrase ‘Monroe Doctrine’ in this administration.”

Lawrence Wilkerson teaches Government and Public Policy at William & Mary College. He was Secretary of State Colin Powell’s Chief of Staff and Associate Director of the State Department’s Policy Planning staff. Before working at the State Department, he served 31 years in the U.S. Army, retiring with the rank of colonel.

END_OF_DOCUMENT_TOKEN_TO_BE_REPLACED

Words and Pictures
Outdoor Screenings During the Pandemic

Between the Covers
The Fish and the Dove