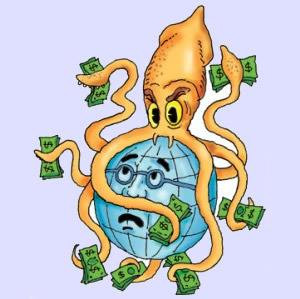 Picking up our coverage on the nuances of Neoliberalism and the rebranding of structural poverty, in this segment we will discuss the large institutional players that have been riding this gravy train since the beginning of capitalism in the U.S. and what their investment strategy means for Portland.

Across the nation it seems that investment bankers are looking to aim their bevy of “financial engineering” tools at large sums of property in literally every city that has been systematically devalued through deindustrialization since the 1970s, when the birth of Neoliberal economics begun to detach itself from the reality of actual physical economy and alternative investments began to sharply increase.

Goldman Sachs, the financial vampire squid that has had its tentacles in every boom-bust cycle since its inception, certainly knows a good bubble to overinflate when they see one. Their recent investment in Cadre, an online brokerage and investment management company started by none other than Jared Kusher and his brother, exemplifies the effect of technocapital on the real estate market.

Cadre, which uses an iBuyer-type trading platform, allowing buyers to invest in packages of unseen real estate,  is not only using algorithmic computer programs to flip houses faster than ever, but to expand the landlord class to a shareholder base. In addition to Cadre, Zillow and others have come up with their own day-trader style platforms for flipping homes, powered by their own supercomputers and proprietary algorithms. Now we don’t have one landlord who demands profit on their investment, but hundred of thousands.

Housing, already egregiously overpriced at the whim of “the market” will now have to perform at ever increasing levels to satisfy shareholders demand for profit. Additionally most of the value of the world economy is now based on these real estate manipulations, to the tune of 270 trillion dollars, or five times the value amount of all gold ever mined.

This pump-and-dump strategy has worked wonders for the investment banking world, at the expense of the employees and their pensions. Since the 80’s Wall Street tycoons have set up an ecosystem of consolidation and bust-outs, sabotaging companies in order to short their stocks for a profit that only serves short-term ends, squeezing profits, undervaluing and underpaying workers, “hollowing out” manufacturing, taking out huge loans then filing bankruptcy.

Now that this gamification of markets has moved into land and housing stock we’re being squeezed by both sides. It’s a problem not only because housing is required for everyone to live, but due to the fact that the Finance Investment Real Estate (FIRE) sector is now one fifth of the value of the U.S. dollar.

If this setup sounds familiar, it should, since this is literally what created the 2007-8 financial crisis, except that this time it’s not just a bubble with mortgage-backed securities, but an “everything” bubble that includes rent-backed securities as well.

So what’s going to happen when the bubble inevitably pops? What do these things mean to Portland and to you? What can we do to avoid this path?

Join Jonathan and Sara from Portland Assembly to discuss these shady market mechanisms, the biggest lies the real estate industry tells about itself, and how making an Anticapitalist Portland can help us build resistance to the storms ahead.

-Jared Kushner just bought $1.1B worth on a loan from Warren Buffet

Terrific intro note and useful links provided, each one a subject for a full hour's discussion. Except for the last one above which leads to this page:
"Well, this is unfortunate... Your story was not found
The story you requested could not be found.
To find what you're looking for, try one of these options.
MarketWatch Front Page
A starting place for all your financial news and information needs."

Here are some explanatory articles I referenced when calling in, by 2-3 of U.S.'s best, if least corporate-captured news media sourced researchers and essayists. Academic women explainers of what we often call "Gentrification" yet really help explain the looting of housing priced in the range of prevailing wages. Key words when searching: Saskia Sassen, Rent Speculation, Deflationary Wages, Inflationary Rental Vacancies Shadow Homeless Crisis; Re-inflating Urban Housing Markets after Crash of 2008.

Introduce yourselves if you are subbing for hosts Paul Roland and Jacqui Keeler. Keep on 'splainin PUMP & DUMP rent speculation Neo-Liberal Economic modeled (surrender to Market Forces and Global Feudal Unfettered capital) innovation for creating new investor markets for ever-climbing rents while the homeless pile up outside of now 18,000 over-priced vacancies in Po'Town, Ore alone.