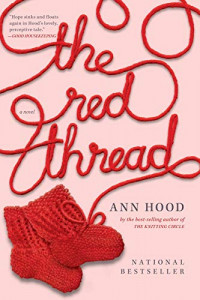 Writer Ann Hood on her novel, "The Red Thread"

Community Grooves is off this month.

Instead we'll hear host Crystal Leighty speaking with writer Ann Hood about her latest novel "The Red Thread," an exploration of the adoption process, specifically the adoption of Chinese girls by five couples in Providence, Rhode Island, brought together by the Red Thread Adoption Agency.

Ann Hood is the author of the bestselling novel, THE KNITTING CIRCLE, and the memoir, COMFORT: A JOURNEY THROUGH GRIEF, which was named one of the top ten non fiction books of 2008 by Entertainment Weekly and was a New York Times Editor's Choice. Her other novels include: WAITING TO VANISH (Bantam, 1988), THREE-LEGGED HORSE (Bantam, 1989), SOMETHING BLUE (Bantam, 1991), PLACES TO STAY THE NIGHT (Doubleday, 1993), THE PROPERTIES OF WATER (Doubleday, 1995), and RUBY (Picador, 1998). She has also written a memoir, DO NOT GO GENTLE: MY SEARCH FOR MIRACLES IN A CYNICAL TIME (Picador, 1999); a book on the craft of writing, CREATING CHARACTER EMOTIONS (Story Press, 1998); and a collection of short stories, AN ORNITHOLOGIST'S GUIDE TO LIFE (Norton, 2004).

Update Required To play the media you will need to either update your browser to a recent version or update your Flash plugin.
Topic tags:
Arts/Culture, Fiction