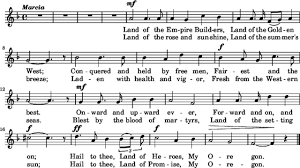 Did you know that Oregon has an official state song? And that the lyrics were only recently changed to remove their racial bias? Harold Johnson both reads and sings his poem “Down In the Valley” in response. Is he talking about the Willamette Valley or rather the Valley of the Shadow of Death?

Update Required To play the media you will need to either update your browser to a recent version or update your Flash plugin.
Download audio file
Topic tags:
Movement for Racial Justice, History, African American, Poetry, Music