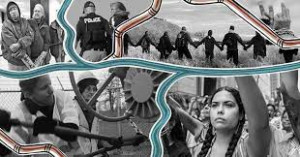 November is National Native American Heritage Month. Today, Jan Haaken talks with Cathy Sampson-Kruse, a member of the Waluulapum Band, Confederated Tribes of the Umatilla Indian Reservation, about an upcoming benefit screening of  "NECESSITY Part II: Rails, Rivers & the Thin Green Line." The event includes a virtual panel event with some of the lead film subjects on Thursday evening November 18th. Directed by Jan Haaken and Samantha Praus, the film explores some lesser known tribal history of Oregon at the forefront of the fight against oil transport and terminals.  Sampson-Kruse is an Associate Producer of NECESSITY Part II and is also featured in the film and she talks with Jan about why she got involved and what she hopes people learn from this film