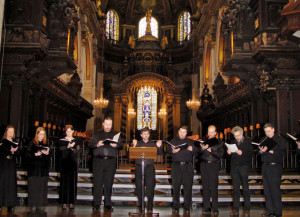 On Tuesday, August 24, 2021, at 11:30 a.m. Joseph Gallivan interviews Mark Powell, the director of early music choir Cappella Romana. Powell talks about how the company expanded its reach during the pandemic, about its upcoming tour of Europe and its new live performance season in the northwest.

This show was edited by KBOO volunteer Ray Bodwell.

Cappella Romana have taken time to listen and reflect, create and plan for a future ahead.

Now that more vaccinations are being administered and cities return to low-risk categories, we are pleased to announce our plans for next season, Cappella Romana’s 30th Anniversary Season: RESURRECTION.

This is a year to bring music back to life!

We will begin our 30th year with recording projects in the summer (all singers will be vaccinated!), followed by our third appearance at the Utrecht Early Music Festival in the Netherlands, where we will perform Lost Voices of Hagia Sophia as the festival’s finale concert in the TivoliVredenburg Concert Hall.

So many of you continued to support us during this year when traditional programming wasn’t possible. We are so grateful for your support during this difficult time.

Cappella Romana is poised to resurrect our voices this coming season, to serve you again with extraordinary experiences of music of beauty and power from East and West.

This show was recorded using a Pixel 5 at Capella Romana’s office in the old Gus Solomon courthouse on August 20, 2021.