Radical Re-envisioning of Life on a Hot Planet 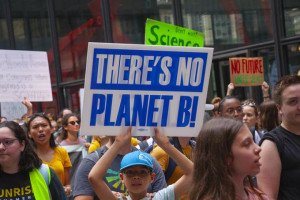 Bill Resnick interviews Richard A. Smith, a historian of modern China, and also an environmentalist activist who co-founded the organization System Change Not Climate Change. His writings include two books: China’s Engine of Environmental Collapse and Green Capitalism: the God that Failed.  In part one of a two part interview Bill and Richard discuss whether human society can survive climate change if it continues under the management of elites determined to maintain capitalism with its requirements for exponential growth. They conclude that unfettered growth is not possible on a finite planet.

In Part 2 next week, they will discuss the immediate future, which is likely to feature more frequent and damaging climate disasters, which in turn will lead to growing demands for a sweeping mobilization of all resources and a command war ecnonomy to meet the threat. Such a develpment would trigger the political war of the century, the left with its program in opposition to capitalist forces seeking ongoing and unsustainable growth. Who will prevail depends on how we organize today.

Update Required To play the media you will need to either update your browser to a recent version or update your Flash plugin.
Download audio file
Topic tags:
Activism, Civil Rights/Human Rights, Corporations, Energy/Natural Resources, Environment/Climate

END_OF_DOCUMENT_TOKEN_TO_BE_REPLACED

Free Culture Radio
An Interesting Time To Be Alive

Rural Roots Rising
Anyone Can Be An Organizer