The Alliance for Safer Communties 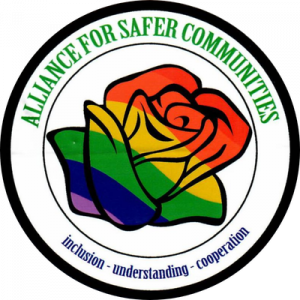 Please join us for Transpositive on KBOO Community Radio on Tuesday, June 1st as we talk with Avi, Danni/y and Elizabeth from the Alliance for Safer Communities, formerly known as the Sexual Minorities Roundtable, one of the longest serving lgbtqia advisory groups in Portland.

About the Alliance for Safer Communities

What is now called the Alliance for Safer Communities (ASC) did not even have a name when it was first formed in the fall of 1992, due to public anger in the Portland lesbian, gay, and transgender communities over actions by Portland Police that specifically targeted gay men.

In response, Chief of Police Tom Potter agreed to help organize a panel of police officers and community leaders to air community grievances and find solutions.

Two years later, on National Coming Out Day on October 11th, 1994, community leaders and Portland Police signed a partnership agreement to formally create the predecessor of the ASC: the Sexual Minorities Roundtable (SMRT). For the past 26 years, the SMRT/ASC has been meeting regularly to discuss the health and welfare of LGBTQAI+ communities in the greater Portland area, support recruitment of queer police officers, work collaboratively on policy, and resolve conflicts.

SMRT/ASC has been and is neutral ground and safer space where marginalized local communities and their allies can meet on equal terms with members not only of local law enforcement organizations, but also local government and the criminal justice system, in order to have frank and honest discussions on matters of mutual concern.

Due in part to these ongoing conversations spanning more than two decades, there is significantly greater presence of sexual and gender minority office in the Portland Police Bureau (and Portland city government generally), as well as greater attention to bias rimes against the LGBTQAI+ community.

Attendance at ASC meetings is open to any and all local residents who are interested in the health and welfare of the sexual and gender marginalized communities locally.

Transpositive is a biweekly program in Portland exploring themes important to those who identify as Transgender, Gender Non-Binary, and Gender Non-Conforming. Transpositive tries to connect listeners with the ongoing activist, arts, culture, and dialogue happening in Portland and beyond. Make your voice heard! Transpositive PDX is open to new and experienced programmers, guests, and events you want our community to know about. We are an open collective. Anyone identify as trans, gender non-binary, gender fluid is welcome to be part of our collective after completing some basic free radio training. For more information contact Emma at transpositivepdx@gmail.com

END_OF_DOCUMENT_TOKEN_TO_BE_REPLACED

Prison Pipeline
Interview with Michael Zoosman of L’chaim! Jews Against the Death Penalty